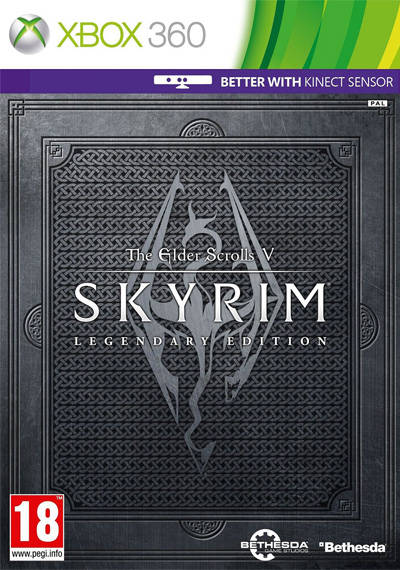 Extras: There is support for Kinect

The famous role-playing saga The Elder Scroll V: Skyrim has collected more than two hundred different awards. And now it is time to exit a single publication that includes not only the original game, but all the supplements thereto.


Publication of The Elder Scroll V: Skyrim - Legendary Edition is addressed to the most loyal fans of the series. It offers not only a game, and three additions to it, but also a variety of improvements - including a battle on horseback, new variants of finishing moves, an additional level of complexity for the most experienced players, as well as "legendary" ability, allowing to develop the skills of your character forever.


The Elder Scroll V: Skyrim. Create a unique character and do in the wizarding world everything they want. Skyrim has absorbed all the best features of the series The Elder Scrolls: freedom of choice, the ability to write the history of Tamriel and experience an unforgettable adventure.

The Elder Scroll V: Skyrim - Dawnguard. You Dragonborn, will meet with the Lord Vampire Harkonnen, who conceived the sun to destroy by force the Elder Scrolls. Will you join the ancient Order of the Guardians of Dawn or decide themselves to become the ruler of the vampires? Whichever side you adopt, you can have many adventures.

The Elder Scroll V: Skyrim - Hearthfire. Be the landowner and build your dream home - a one-room hut or a huge mansion with his weapons, alchemical laboratory and other necessary buildings. Use new tools to build with stones, clay and timber furniture and decorations. And with the possibility of adoption, you can turn your home into a real home.

The Elder Scroll V: Skyrim - Dragonborn. Leave behind the harsh Skyrim. In the vast expanses Solsteyma you have to meet the dark elves and meet with the tribe Skaal. But most importantly, you will come face to face with an unprecedented adversary - the first Dragonborn.