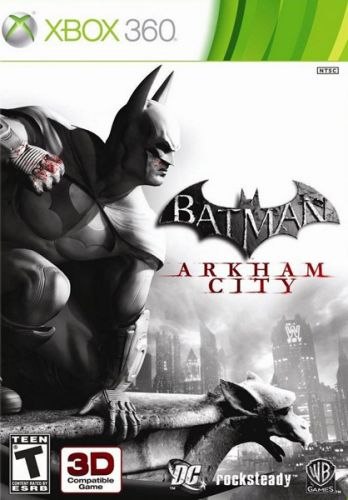 Uploaded: 27.11.2022
Content: text 29 symbols
Loyalty discount! If the total amount of your purchases from the seller ossis more than:
If you want to know your discount rate, please provide your email:

ossis information about the seller and his items
offlineAsk a question

Extras: There is support for 3D

Studio Rocksteady - creators of the project Batman: Arkham Asylum - new players are invited to plunge into a dark and mysterious atmosphere of Gotham City in the game Batman: Arkham City.


Arkham - an area where rampant released from a psychiatric clinic and to their own mad, inveterate criminals and maniacs. This is a black spot in the heart of Gotham City, separated from the surrounding city impregnable wall. And as you know, where the evil - and there Batman! In Arkheme legendary man-bat to meet many famous heroes and villains, and players will be felt, what it is - to be the Dark Knight.


- The Dark Knight. In the spectacular fights Batman is already used as otochennye to perfection, as well as new techniques and skills. Life in Arkham City - is a fierce battle in the streets, intense espionage mission, exciting investigation, epic battles with supervillains in which the identity of Batman can be revealed from an unexpected quarter.


- Cat game. Another game character Batman: Arkham City will be a charming cat. In a beautiful superheroine is its own history, intertwined with the adventures of Batman, and its ability, fighting techniques and equipment will give everyone a completely new feel of the game.


- One against many. This time, Batman will perform well against the organized and skilled opponents, who are trained to use heavy weapons, assault teams and attack from all sides. However, man-bat is not easy: he now has twice as many combat moves - attacks, counterattacks and crushing blows.

New gadgets. Along with the familiar wonders of technology at the disposal of Batman will be a completely new device, such as a decoder (Cryptographic Sequencer) and smoke grenades (Smoke Pellets), significantly extending the range of his superpowers.


- Golden Pen. For the story Batman: Arkham City meets five times winner of the "Emmy" writer Paul Dini (Paul Dini). From his pen came a fascinating story, unfolding in a terrible and beautiful place. After the closure of hospitals and prisons Arkhem Blekgeyt new mayor of Gotham ordered to allocate part of the city to create a private area, which included both industrial and historic neighborhoods. It is named Arkham City.


- They need to know in person. Players will meet many heroes and villains of the universe, man-bat. Among them are two-faced, Harley Quinn, Penguin, Hugo Strange, Victor Zsaszom, Calendar Man, Joker, Riddler, and many others.


- Guest stars. The main heroes of the game, Batman and the Joker, gave their votes to the Hollywood stars Mark Hamill, who played the famous Jedi Luke Skywalker, and Kevin Conroy, Batman of the many permanent cartoons.