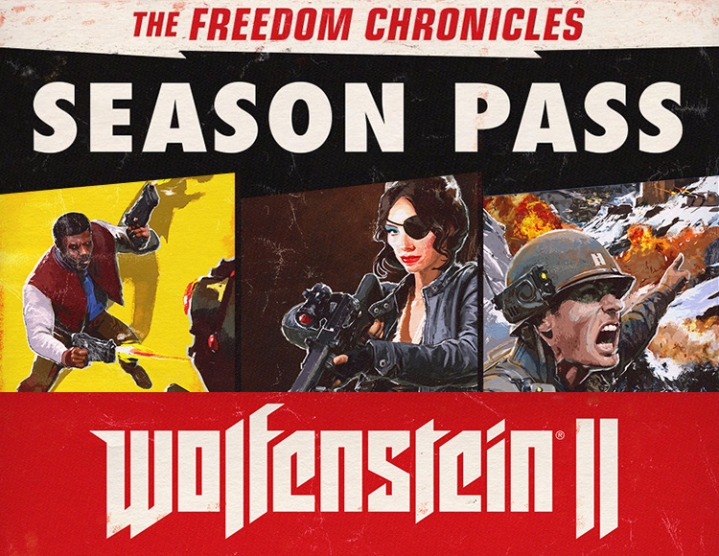 Description:
Attention! The launch requires the presence of the game Wolfenstein II: The New Colossus. The liberation of America from the Nazis is just beginning. Continue the fight! Season ticket "Wolfenstein® II: Chronicles of Freedom" gives access to three additions. Play for the glorified American heroes: Joseph Stallion, Jessica Valiant and Gerald Wilkins! Visit the new corners of the country, mutilated by the Nazis! Exterminate the Nazis, using weapons and abilities! Only you can kill the Nazi hydra in ... "The Chronicles of Freedom!" The Chronicles of Freedom includes three additions: "The Adventures of Arrow Joe" - in the role of the former quarterback Joseph Stallion, crush the crowds of Nazis on the ruins of Chicago and poke into the depths of space! "Diary of the agent Silent death "- Become former OSS agent Jessica Valiant, sneak into a Nazi bunker near California and uncover the secrets of Operation San Andreas!" "The incredible exploits of Captain Wilkins" - go to the Nazi-seized Alaska along with the war hero, Capit US Army Dept. Gerald Wilkins to disrupt the operation "Black Sun"! The season ticket subscription can be changed. * Season ticket buyers will receive content from the season ticket "Wolfenstein® II: The Chronicles of Freedom". The composition of the season ticket is not final, it can be changed and may not include all the downloadable content available for the game. Seasonal subscription content may not be available in all countries, and the price and timing of the release may depend on the particular platform. Content from the season ticket must be downloaded only through the in-game store; Do not purchase add-ons separately, otherwise you will have to pay them again. Content from the season ticket can be sold separately. To start, you need a basic game that is sold separately. We would like to draw your attention to the fact that the versions of Wolfenstein® 2: The New Colossus (the "Game") for all languages ??except German contain symbols and materials related to Nazism. In this regard, the sale, import, export, distribution of other language versions of the game and the corresponding images and materials on the territory of Germany are prohibited by German law and are, in particular, a criminal offense punishable by a fine or imprisonment. Any person who committed this crime may be criminally liable, including managers and employees of companies that violated the law. Following the recommendations of lawyers and established practice, ZeniMax also decided not to distribute the relevant images and materials in Austria.