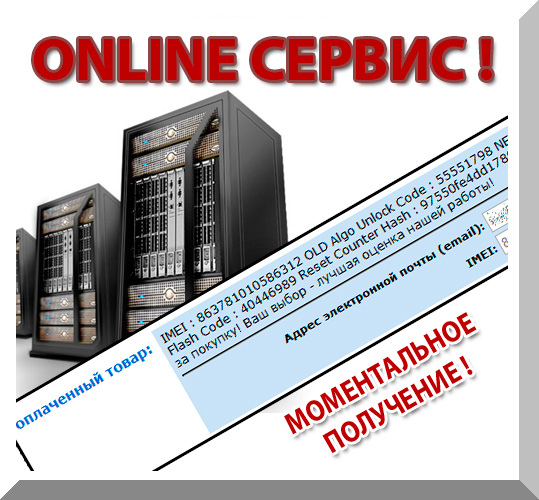 Decker information about the seller and his items
offlineAsk a question

Unlock 3G modems Huawei NCK-code. Unlock Huawei modems from any operator (which is locked on your modem) is carried out by using a unique IMEI code NCK received specifically for your modem. The buyer receives NCK code corresponding to its IMEI automatically, immediately after payment. Answer format contains the following information:

Where OLD Algo Unlock Code - Unlock Code for modems with old firmware version (the old algorithm), NEW Algo Unlock Code - for modems with the new firmware version (new algorithm). To unlock the modem simply insert the sim-card of another operator, a window appears with the input field. Enter the code in the window. If the request code does not appear, you can enter the unlock code via terminal programs, such as, HyperTerminal, PuTTy, Huawei Modem Terminal and others. With the command:

AT^CARDLOCK="nck code" - unlocking, where nck code - code that you bought.

Flash Code - Flash code is calculated as the old algorithm and the new. Flash code is requested when the modem firmware.
---------

You get paid for your PIN immediately after the payment and enter IMEI! Delivery of goods to the buyer is carried out automatically, without operator intervention!

ps Making the payment you agree to the Terms of Service and confirm that you understand how to use (where to enter, etc.) resulting NCK code. Before making a purchase, check whether there are any in the modem attempts to enter the code!

pps IMPORTANT! Before purchasing a product, make sure that your device is in the list of supported models! Carefully read the product description. If you buy this product it turns out that you have a different model of the device, or the device used up all attempts to enter the unlock code - will not be reimbursed, and the service of the unlock code is considered rendered in full.

Immediately after payment you will receive a form to fill in the registration data, which will have to fill the following fields:

These data will be transferred to the seller to complete the transaction of purchase and sale of goods.