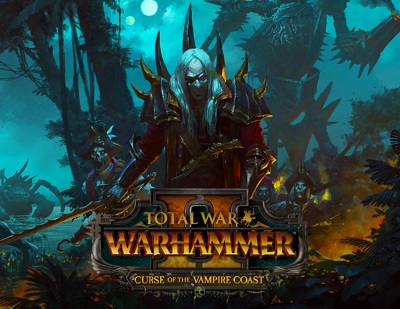 Uploaded: 08.01.2023
Content: text 19 symbols
Loyalty discount! If the total amount of your purchases from the seller SOFT-KLUB more than:
If you want to know your discount rate, please provide your email:

ATTENTION! To access the content of the add-on, you must have activated the game Total War: WARHAMMER II.

You buy the official key of the add-on Total War: WARHAMMER II Curse of the Vampire Coast from SEGA

These cruel sailors have long roamed the oceans, collecting tribute in blood and gold. But now that Ulthuan´s Vortex is weakening, ordinary treasures are not enough for captains: the sea holds a harpoon of star metal, and with this incredible weapon you can subdue even the greatest merwyrm!

COMPOSITION OF THE SUPPLEMENT:
- 4 new legendary lords - master of the undead,
- New School of Magic: "Wisdom of the Depths",
- New system of game mechanics in the campaign,
- Unique upgradable ships for each legendary lord,
- Eight new famous squads,
- A unique technology tree that unlocks four new Lords of the Vampire Coast,
- A system of naval positions to reward undead admirals,
- New squads: lead nightmarish creatures of the ocean, underwater creatures with huge claws, ghostly monsters and hordes of zombie pirates armed with muskets into battle,
- New Vampire Coast factions are available in the Vortex Center and Mortal Empires campaigns. However, they do not participate in the struggle for the Great Vortex: they have their own goals and objectives ...