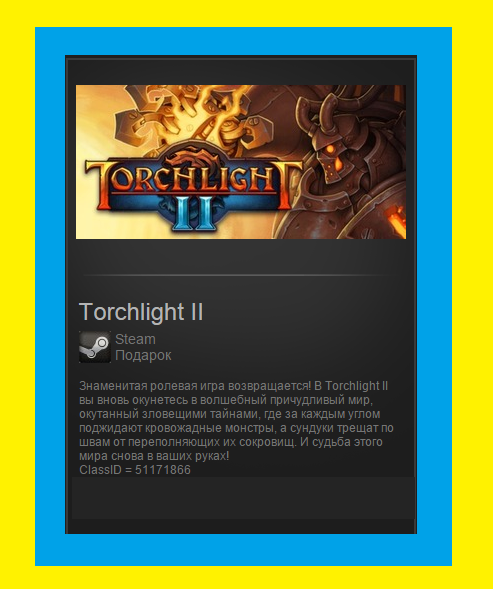 Play-Sky information about the seller and his items

The famous role-playing game is back! The Torchlight II you again plunge into a magical bizarre world shrouded sinister secrets, where around every corner waiting for the bloodthirsty monsters and chests bursting at the seams from the overflowing of their treasures. And the fate of the world back in your hands!
We really tried to play Torchlight II has not lost the charm and excitement of the first part, and at the same time added a lot of innovation - including so expect fans the opportunity to play with your friends via the Internet and LAN. Torchlight - rapid, fascinating role-playing game, the eyeballs filled with battles and booty booty. Embark on an adventure in splendid isolation, or a group of friends!

Key features:
Multiplayer: Play with friends on a local network or the Internet - it does not need to subscribe or purchase items. Our new service will pick up your partner helps you find friends, to create a new game or join an existing one. And as usual, you can always select a single mode.
Detailed editor hero: the player can choose one of four classes, gender, and add unique features to the look of the character. New skills and items will allow you to make your character unique.
Modifications: TorchED - editor for Torchlight II - provides the ability to create their own modifications that enhance the gaming world. Invite your friends to download your original modification and play vmeste.Redaktor TorchED will be available shortly after the release of the game.
New Interface: Torchlight II boasts a new, advanced interface for the development of which will take quite some time. Intuitive, he will play as you wish.
Open World: border Torchlayta parted! You are waiting for vast expanses and many cities. Fight day and night, in rain, snow and blizzard. Maps created at random, which means that all roads, monsters and treasure every time will be located elsewhere.
New Game Plus: In this mode, the game does not end up as long as you do not want. If you get through the main campaign Torchlight II, you can start again with the same character - but this time the game will be much more difficult. And you save all acquired by back-breaking labor skills, and gold outfit!
Livestock and fishing: the players with all my heart attached to their pets, and at the same time become an avid fisherman, so we decided to keep those elements of the game. The new game features a wide selection and an incredibly colorful effects. Note that pet is not forgotten how to run the city and sell it prey.

Please leave your feedback after the purchase!

1. You need to download and install Steam http://steampowered.com/download/SteamInstall.msi
2. Go to your account or register a new one.
3. Next, follow the link received after purchase authorization by their Steam account and take a gift to the library or add to your inventory.
4. After activating the game appear in the library or in your inventory where you can already start to play later or activate / give to a friend.

=============
Dear customers - positive feedback from you to raise our rating, thereby increasing our sales and thereby making it possible for you to reduce the prices of our products!
=============

P.S. All Gift Buy only through official channels.