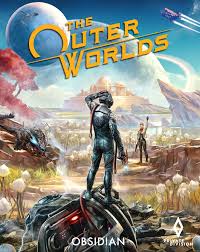 Uploaded: 19.11.2022
Content: text 23 symbols
Loyalty discount! If the total amount of your purchases from the seller mrakk more than:
If you want to know your discount rate, please provide your email:

✅ THE LICENSE KEY FROM THE OUTER WORLDS IS DISPLAYED IN THE BROWSER WINDOW AND COME TO YOUR E-MAIL AUTOMATICALLY AFTER PAYMENT!!!

Activation: EPIC Games
Language: Russian, English, Spanish, Italian, Chinese, Korean, German, Polish, Portuguese, French, Japanese
Activation region: Ukraine and CIS countries (It may not work in Russia and BELARUS. If you buy, then at your own peril and risk)ABOUT THE GAME:

In The Outer Worlds, you awaken from hibernation on a settler ship that goes missing on its way to Alcyone, the farthest terrestrial colony at the edge of the galaxy. You find yourself at the center of a large-scale conspiracy that threatens the existence of the entire colony. The character you create will be able to influence the course of this story, exploring the depths of space and meeting numerous factions that are fighting for power. A new unpredictable variable appears in the system of equations of a corporate colony - it´s you.

GAME FEATURES:
- A role-playing game where the player determines the development of the plot: Obsidian is true to its traditions, so the events in The Outer Worlds depend on you. Your decisions affect not only the plot, but also the development of the character, the fate of companions and the final game.
- The good news is that you are not perfect: The Outer Worlds has a unique flaw system. They form the character of any bright hero.
- The game analyzes your actions and determines what you do the worst. Are you constantly attacked by raptidons? Pick the Raptiphobia flaw and you´ll be weaker against these creepy creatures, but you´ll get an extra ability in return. Thanks to this choice, you will be able to create a unique character during your travels in Alcyone.
- Control your companions: as you explore a distant colony, you will meet many characters ready to join your team. They have unique abilities, tasks, motives and ideals. You can help each companion achieve their cherished goal, or use it for your own benefit.
- Explore the corporate colony: Alcyone is a colony at the edge of the galaxy, owned and run by a corporate board of directors. Everything is in his power ... except for the alien monsters that appeared after an unsuccessful attempt to terraform the two planets of the colony. Obtain a ship, gather a team and set off to explore the settlements, space stations and other corners of Alcyone, full of mysteries.

The Sims 3: Into the Future STEAM GIFT RU