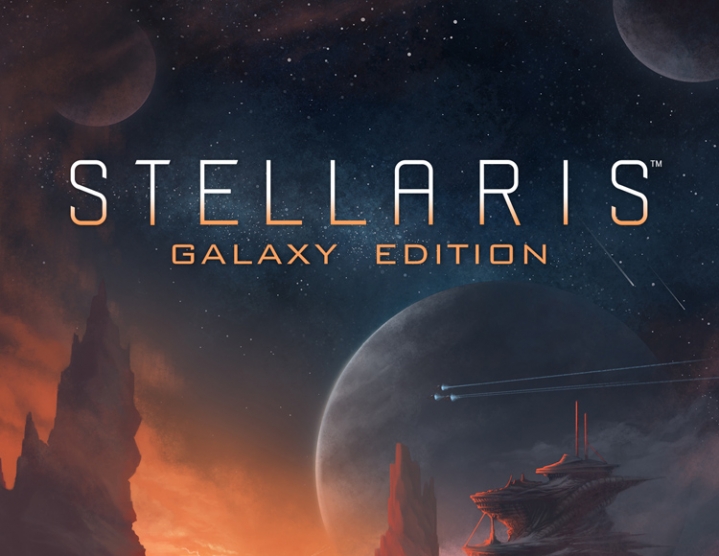 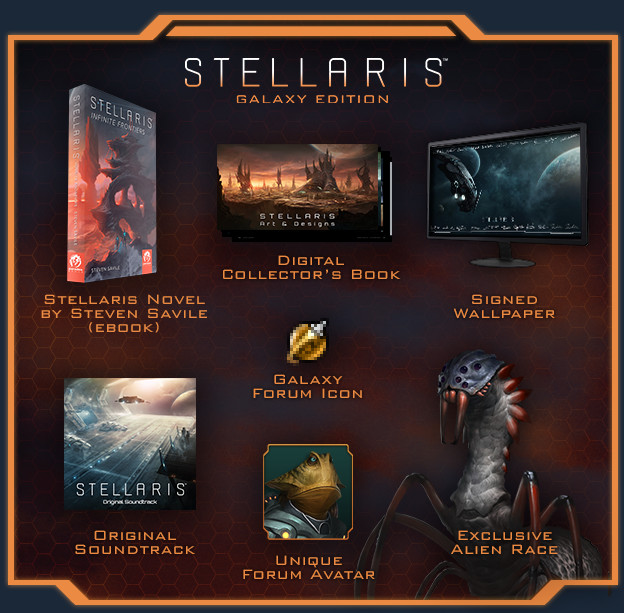 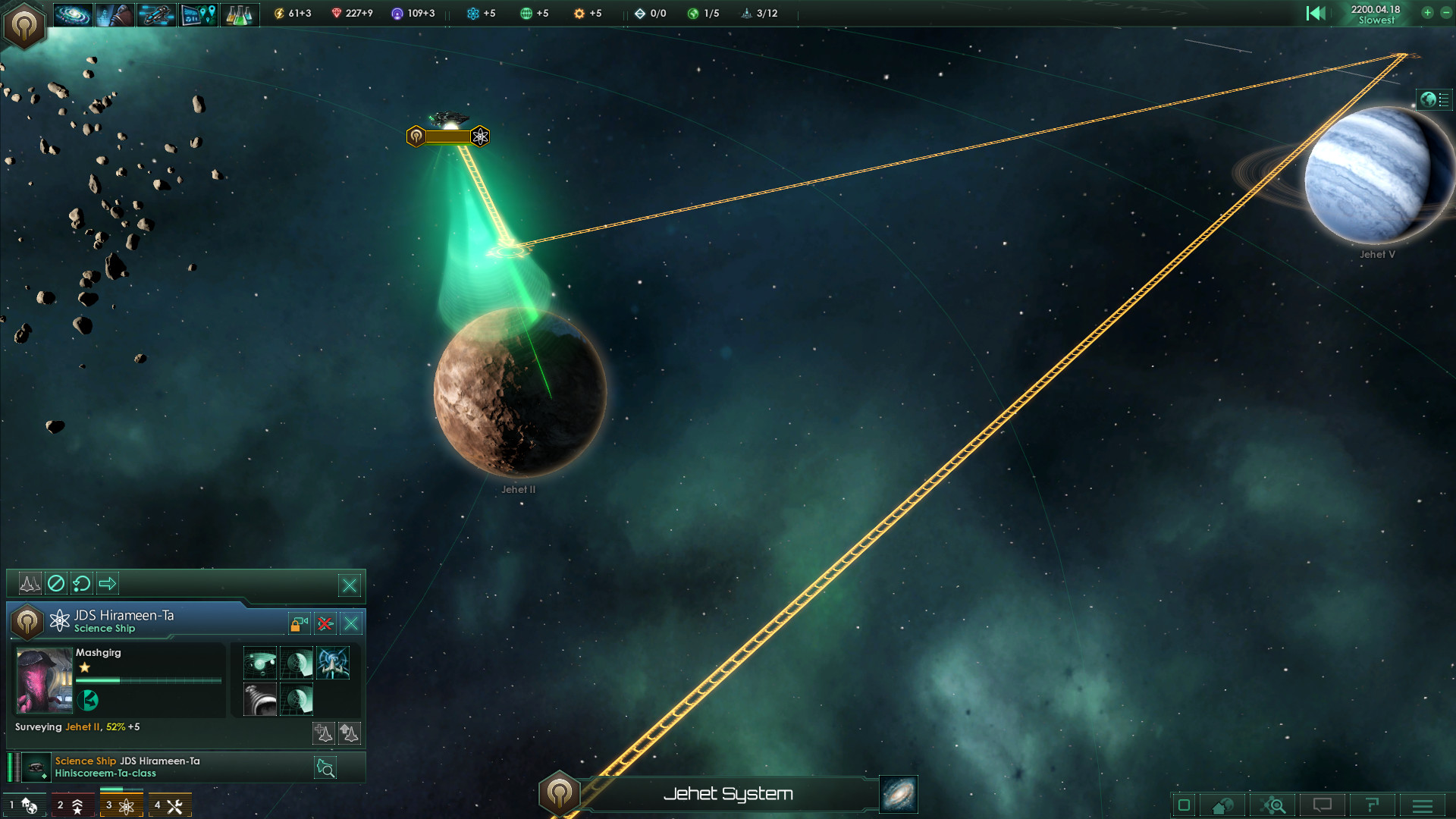 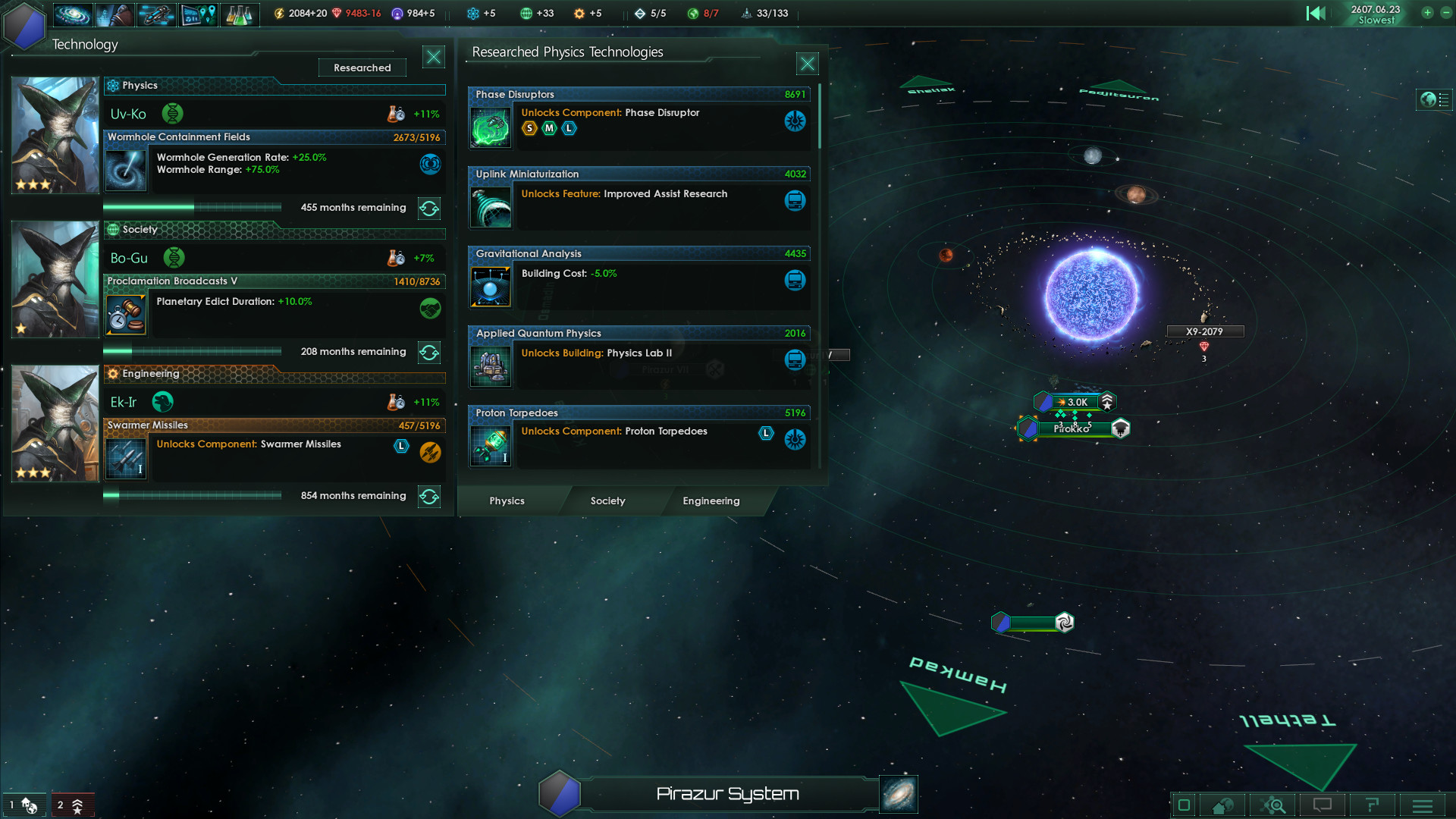 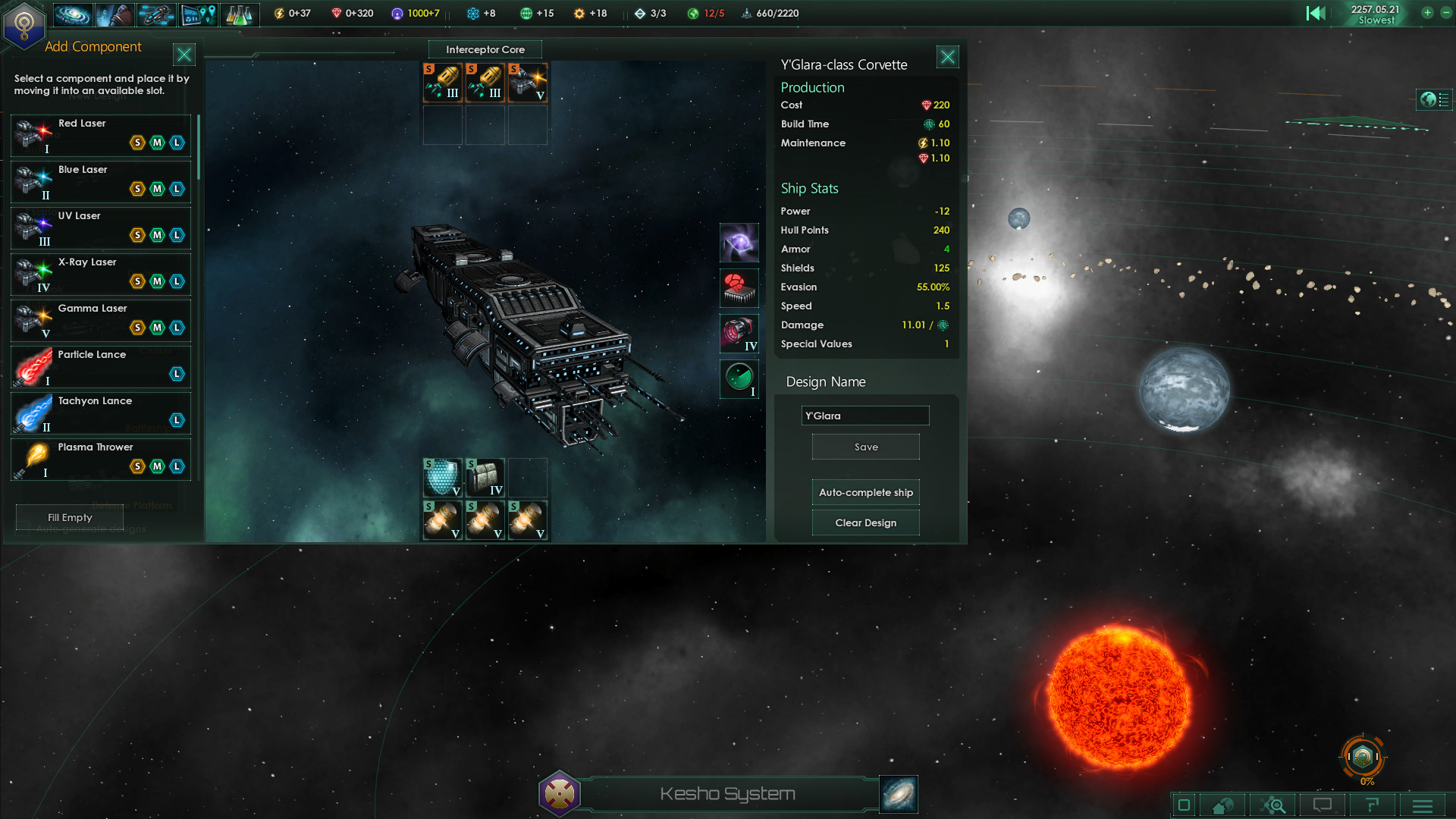 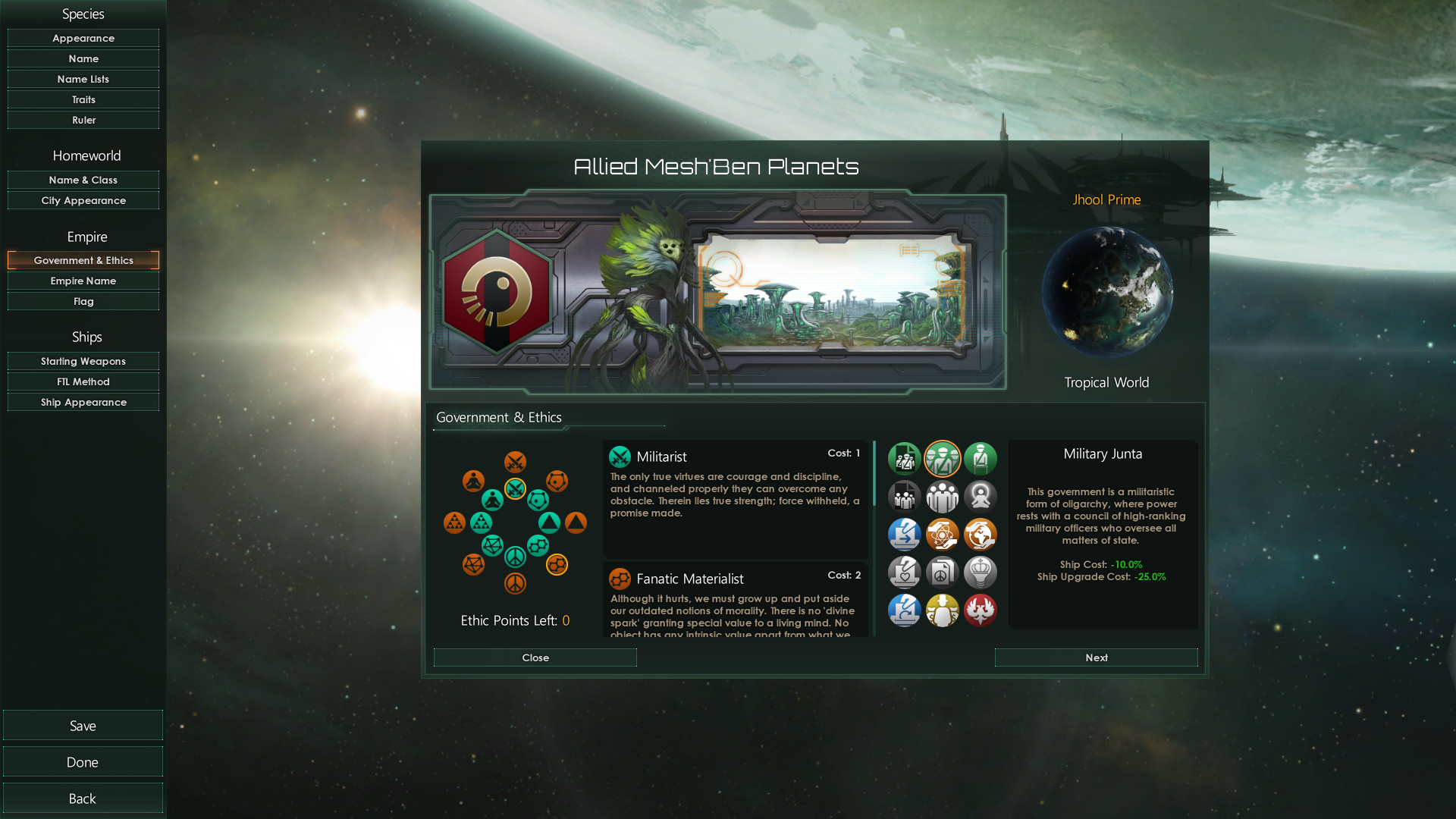 Description:
Go to the vast universe, full of wonders! The company Paradox Development Studio, which created the famous series of Crusader Kings and Europa Universalis, represents a further evolution of the genre of Global Strategies, devoted to research and development of space prostranstva.Stellaris - a thoughtful strategic gameplay, an impressive variety of alien races and truly fascinating story. This is an exciting pastime exploring the space expanses where you have to travel, meet the inhabitants of distant worlds, interact with them and constantly learn something new. Write your name in the history of space exploration and create your own galactic empire! Colonize distant worlds and assimilate their inhabitants. Conquer the star systems by force or try to achieve what is desired by diplomatic methods? Choose you.Stellaris Galaxy Edition includes: Original digital soundtrack The Stellaris soundtrack is two and a half hours of original music, including bonus tracks and alternatives not included in the game. The themes composed by the composer Andreas Valdetoft and performed by Mia Stigmar with the accompaniment of the Brandenburg State Orchestra will awaken in you the spirit of pioneers and fearless explorers with the help of an alloy of orchestral and electronic music. Music themes are provided in MP3 and FLAC (without loss of sound quality). Exclusive alien race (cosmetic content) Colonize the unknown world and create a glorious empire of spiders! Exclusive alien race will enter your game with a unique arachnid entourage. When friends ask you how you got these space spiders, simply tell them that they have found on the World Wide pautine.Tsifrovaya collectible knigaPrisoedinites Stellaris to the creative team, to learn how to play aesthetic was developed and implemented in the most unique visually the game studio Paradox . From conceptual sketches to finished illustrations-and 3D-rendering, this exclusive 130-page book includes a collection of artistic content of the game, along with the statement of the reasons that led to their creation, as well as the story of the challenges the team faced along the way, and how their overcoming.Stellaris: The story of Infinite Frontiers from Stephen Saville (e-book) Popular writer Stephen Saville wrote an original story based on the story Stellaris game company Paradox. When Mankind receives proof that people are not alone in the universe, it is divided into two parts: some believe that our species should seek salvation in potential friends amongst the stars, while others believe that it is necessary to prepare for the inevitable war. What vicissitudes await the ship of colonists, rushing to the unknown in search of a source of mysterious alien signal? You learn it by downloading the book in the epub format, mobi (Kindle) or PDF.Eksklyuzivny avatar and icon of forum GalaxyProdemonstriruyte his love for Stellaris at the Paradox forums and social networks! Wallpapers podpisyamiProdemonstriruyte his compliments to the pioneers who went into the unknown, with this wallpaper for Desktop with signatures of the Stellaris development team. Key Features: Deep and diverse research system.
Giant procedurally generated galaxies with thousands of planets.
The study of anomalies due to the abilities of the Scientific Leaders.
Infinite species diversity due to flexible settings and procedural generation.
An expanded system of diplomacy worthy of a global strategy.
A ship builder, based on a large array of available technologies.
Incredibly beautiful space.