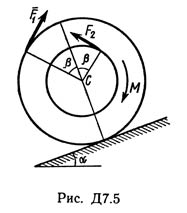 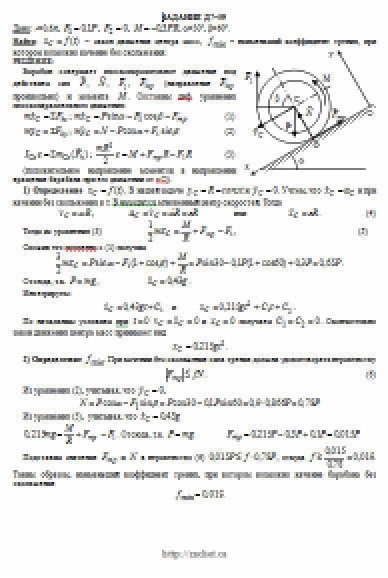 Михаил_Перович information about the seller and his items
onlineAsk a question

A drum of radius R of weight P has a recess (as in a coil) of radius r = 0.6R (Fig. D7.0 - D7.9, table D7). To the ends of the yarns wound on the drum, constant forces F1 and F2 are applied, the directions of which are determined by the angle β; In addition to the forces, a pair with a moment M acts on the drum; when in the table M <0, the direction of the moment is opposite to that shown in the figure. When driving, starting from a state of rest, the drum rolls without sliding over a rough inclined plane with an inclination angle α, as shown in the figures. Neglecting the rolling resistance, determine the law of motion of the center of mass C of the drum, i.e., xC = f (t), and the smallest value of the friction coefficient f is the plane at which sliding without sliding is possible. Consider a drum as a continuous homogeneous cylinder of radius R.