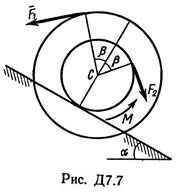 Sold: 0
Uploaded: 27.04.2016
Content: d7-73.zip 31,35 kB
Loyalty discount! If the total amount of your purchases from the seller TerMaster more than:
If you want to know your discount rate, please provide your email:

TerMaster information about the seller and his items
onlineAsk a question

Solution of the D7 version 73 of Reshebnik on theoretical mechanics of guidance manuals SM Targ 1982. CONDITION TO THE PROBLEM D7 (p. 79-82 Manuals Targ SM 1982.): The drum of radius R weight P has a recess (as in the coil) of radius r = 0,6R (Figure D7.0 - D7.9, Table. . D 7). To the ends of yarns wound on the drum constant applied force F1 and F2, directions are determined by the angle β; except for forces on the drum acts to couple moment M; When in Table M <0, the direction opposite to the time shown in the figure. When driving, starting from rest, the drum rolls without slipping on an inclined plane with a rough angle α as shown in Figs. Neglecting the rolling resistance, to determine the law of motion of the mass center of the drum, ie. E. XC = f (t), and the lowest value of the coefficient of friction f of the plane in which the possible rolling without slipping. The drum is regarded as a continuous homogeneous cylinder of radius R. The task D7- the use of differential equations of plane rigid body motion.

After payment you will get a quality solution task D7 Option 00 on the theoretical mechanics of Reshebnik SM Targ 1982. Mission accomplished for methodical instructions and control tasks for part-time students of construction, transport, machine-building and instrument-making professions universities edited Targ SM 1982 edition.
The decision is decorated in a format word / pdf / manuscript in jpg or gif format specify if necessary.

I would be very grateful, if after downloading works you leave a positive review.
Thank you in advance.