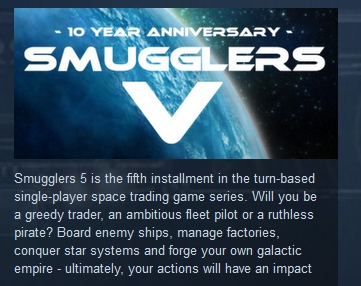 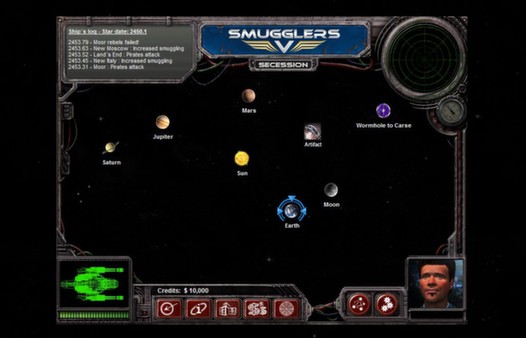 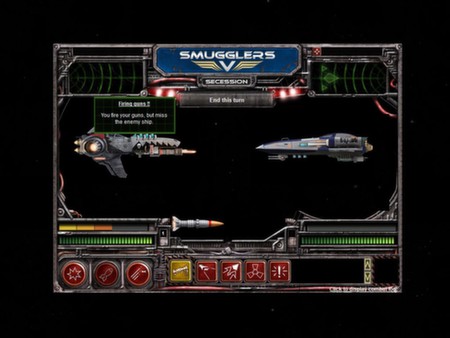 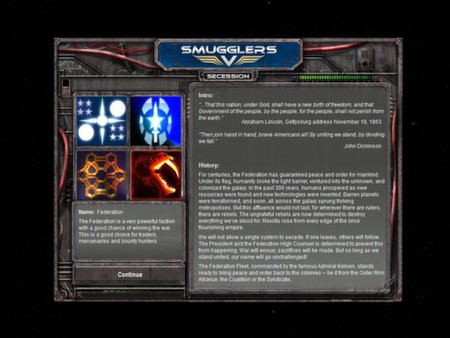 Smugglers 5 is the fifth installment in the turn-based single-player space trading game series. Will you be a greedy trader, an ambitious fleet pilot or a ruthless pirate? Board enemy ships, manage factories, conquer star systems and forge your own galactic empire - ultimately, your actions will have an impact on a galactic scale.

The galaxy is at war - the Federation, the Coalition, the Outer Rim systems and the criminal Syndicate battle for control. It´s a dangerous life for a pilot on the front lines, but it can also be a lucrative one - are you an honest trader, or does smuggling illegal goods sound more profitable? Will you join the war effort for your faction, set up your own empire or simply explore the galaxy?

The fifth instalment in the long-running Smugglers series features a completely revised turn-based combat system and a range of new ships to fly, as well as a host of exciting features:

★ Explore the galaxy through a fast turn-based travel and combat system
★ 4 factions; 6 professions with new, unique skill trees; 100+ different skills and a revised skill system
★ 30+ spaceships and encounters ranging from fighters up to battleships, cruise missiles and star bases
★ Non-linear war and campaign system. You can influence the war!
★ Manage a crew, board enemy ships, become Admiral and command whole fleets
★ Plunder planets and pirate outposts, conquer space systems and even rule your own empire!
★ Supply and demand based trading with the storyline and campaign influencing prices
★ More than 80,000 words of interactive non-linear storylines (that´s about the size of two novels)
★ Advanced text generation technology and new planet exploration short stories make every game different.
★ Marry a beautiful wife and have children
★ Optional compatibility mode to allow blind players to enjoy the game
★ and much more ...

The six most important new features compared to Smugglers 4:

★ You can now start and rule your own empire
★ Manage your own factories or pirate outposts
★ Raid and plunder planets or pirate outposts
★ 80,000 words of new and dynamic short stories (the equivalent of a full length novel).
★ Completely revised skill and combat system
★ Play as an independent adventurer - or join the military

There´s a ship in the hangar and the stars are calling to you. Don´t keep them waiting.