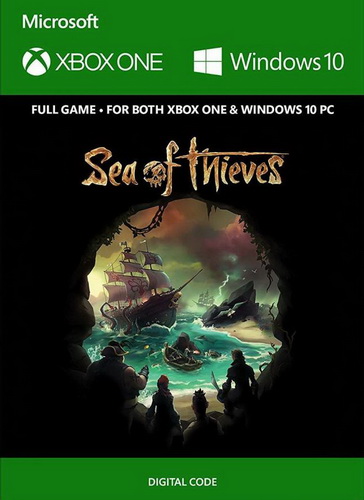 Uploaded: 14.06.2022
Content: text 65 symbols
Loyalty discount! If the total amount of your purchases from the seller GameOkey more than:
If you want to know your discount rate, please provide your email:

GameOkey information about the seller and his items
offlineAsk a question

The game Sea of ​​Thieves takes place in the open expanses of the sea, where the player takes on the role of one of the pirates on the ship. The size of the ship in the game directly depends on the number of players, and are designed for one, two and four pirates, respectively. One of the most experienced and trusted participants can take on the role of captain, and the rest perform the work of sailors: lower and raise the anchor, change the direction of the sail and ring the bell when approaching another ship and coordinate the direction on the map from the cabin of the ship.

Activation using the Xbox One / 360 / Series S / Series X console:
-Load the “Home” screen (make sure you are logged in) and go right to the “Store”
-In "Categories" select "Games."
-Select the option “Use code”.
-Select the option “enter 25-digit code” and enter the code

Activation via web browser:
-Launch a web browser and go to: https://redeem.microsoft.com
- Log in using your Microsoft credentials.
-Enter the activation code and click "Next"; Follow the instructions to confirm.

Shadow of the Tomb Raider Definitive Edt. Xbox One CODE