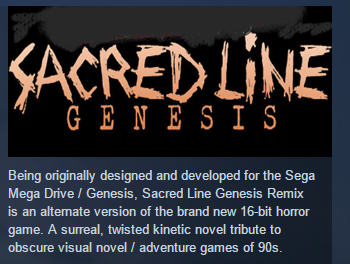 1812 Productions presents the new version of the game made for the evolved generation of Steam gamers. Packed with the most wanted feature every modern PC gamer wants to experience in its most primal form - trading cards crafting.

You are playing as Ellen, a private detective living in eastern Europe. Lately, her business has not been going well, which leads her to the decision of closing the office. But on the last day of work, an eerily familiar yet anonymous voice calls her by phone and asks her to inspect a hidden forest outpost. Intrigued, Ellen leaves for the case she could only find in her worst nightmares...

Remix Version Features / Differences
The new version is entirely kinetic and features Normal ending only (all choices, battles, bad endings and Secret ending have been removed)

Completely different engine with a completely different GUI
Save / Load system with multiple slots
Higher resolution graphics: original 576p stillshots vs. Genesis compressed 240p ones
HQ soundtrack: uncompressed original tracks and new tunes which were removed from the original game due to ROM size limit
Newly Included Fan-Made French translation: thanks to the hard work and generosity of Bob Ballard
Cartridges are for dinosaurs! Craft virtual badges like nobody´s business and pay real money for the .png pictures to feature them on your profile and make your Steam friends proud of you