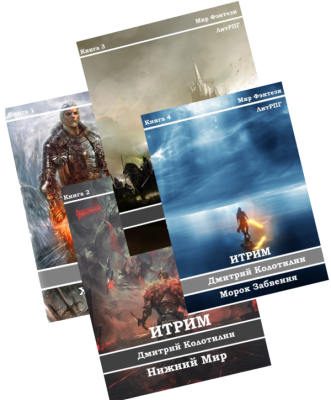 The game world, called the players "Itrim", is rapidly gaining popularity and its influence on the world has disastrous consequences for the world economy. There are massive cuts in all sectors, it all started with hazardous areas of production, and now it was the turn of office workers. Where to go, to earn at least to feed? Legal only one way out: to start making virtual worlds, replace the "Bread and Circuses, land to the peasants and workers in the factories."
Can you live in the game? Is it possible to earn in the game? Is it possible to achieve something, not having achieved in the real world? What is real and desirable: - Real or Wirth?

The cycle of virtual worlds with a full immersion of consciousness, but the hero, lived all his life in Russia, is building the world around him with his close entourage, but not a pattern imposed on television.

Author texts FB2. To read books, use the reader for that format. MS Word will not open these files.

Itrim. Ahead of eternity. (Book 3)