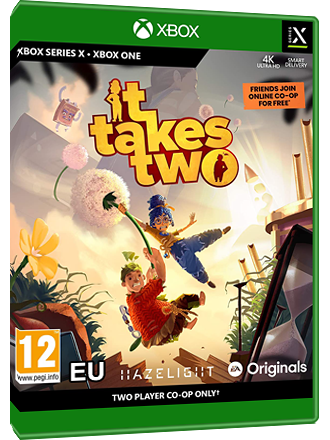 Uploaded: 31.12.2022
Content: text 29 symbols
Loyalty discount! If the total amount of your purchases from the seller NeMeNi more than:
If you want to know your discount rate, please provide your email:

A VPN with a connection to TURKEY
is required to activate the key
After activation, the game WITHOUT REGIONAL RESTRICTIONS
The game is forever associated with your Microsoft account
You will be able to download the game in any region and at any time, with all available languages
Languages: Russian (subtitles), English, German, French, Polish, Portuguese, etc.

It Takes Two uses Smart Delivery technology - buy the game once and play it on Xbox One or Xbox Series X | S.

Embark on the craziest journey of life in It Takes Two, a multi-genre adventure created exclusively for co-op. Invite a friend to join for free with the friend version *, joyfully overcoming many challenges. Play as a parted couple, Cody and May, two people who are magically transformed into dolls. Together they find themselves in a fantastic world where unexpected ambushes await them around every corner, and they reluctantly have to save their ruined relationship.

Improve the unique and interdependent abilities of your characters at each new level. Help each other cope with unexpected obstacles and moments of loud laughter. Kick bandit squirrels in fluffy tails, fly in panties, become a DJ in a noisy nightclub and sled through a magical snow globe. Enjoy a heart-warming and hilarious storyline where storytelling and gameplay are intertwined in uniquely metaphorical entertainment.

It Takes Two was created by award-winning studio Hazelight, a leading collaborative game developer. You will go on a crazy and wonderful journey, where only one thing is clear: together we are better.

KEY FEATURES:
EXCLUSIVELY JOINT MODE - invite a friend to join for free with the friend version * and embark on a breathtaking adventure for just two. Choose a joint mode on a split screen - "together" or over the network and face always different challenges, which can only be dealt with together.

A FUN AND DESTROYED GAME - From rampaging vacuum cleaners to polished love gurus - in It Takes Two you never know what you´re going to face. In an adventure full of inherent challenges and new character abilities to be honed at every level, gameplay and storyline have metaphorically blended together in a bizarre way that pushes the boundaries of interactive storytelling.

RELATIONSHIP STORY UNDERSTANDED - Learn a touching and heartfelt story about overcoming trials. Help Cody and May learn how to overcome differences. Meet strange and cute characters. Join forces and embark on an unforgettable adventure - together!

ABOUT HAZELIGHT:
Hazelight is an award-winning independent game development studio based in Stockholm, Sweden. It was founded in 2014 by Yusof Fares, director and creator of the award-winning Brothers: A Tale of Two Sons. In making games, Hazelight pushes the boundaries of creativity as much as possible. In 2018, Hazelight, as part of the EA Originals program, released the BAFTA award-winning A Way Out, the first co-op action-packed adventure in third person only.

Instructions for activating from a phone without VPN: XBOX app on iOS or Android with mobile Internet enabled