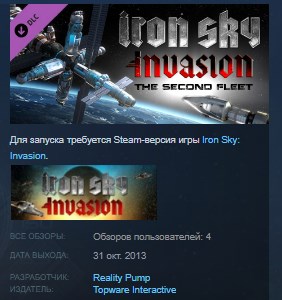 The Add-on "The Second Fleet" brings Iron Sky: Invasion´s action to a whole new level! Become a true space commander, assuming control of not only your own ship, but an entire fleet of Earth’s forces! This addition of tactical real time strategy coupled with frenetic space combat offers a brand new dimension of interstellar dogfighting.

A seemingly endless stream of enemy vessels loom on the fringes of space, threatening to completely overtake earth’s forces. Ignite the flames of war and fly deep into space, cutting a swath of destruction through the enemy ranks as you rocket to victory, commanding your forces for the glory of earth. Only a true tactical commander can destroy “The Second Fleet”.

Controlling a fleet of ships is easy to learn but difficult to master. Players must keep a close eye on their real time map, and make tactical decisions of the fly, sending squadrons of fighters across open space to take down interstellar threats as they emerge.