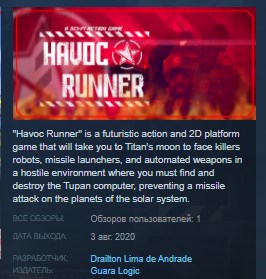 "Havoc Runner" is an action 2d platformer game set in a space future, in which the cold war between planets is over, and the solar system is at peace again. However, this brought an enormous task of disarming several planets and satellites.

During the work on Titan´s moon (on Saturn), the central computer (the "Tupan") of the "Anhanguera" base understood that the war is not over yet and began the sequence of launching ballistic missiles to various planets.

Now it is up to you to use a mechanical vehicle (the "Lampião") and disable all defenses on that base and stop the attack, even if it means having to make way with the use of unnecessary force.

You shouldn´t expect this to be an easy task, because the place is full of automated weapons (killer robots, missile launchers, traps ...), so get ready for a turbulent descent on Titan´s surface.