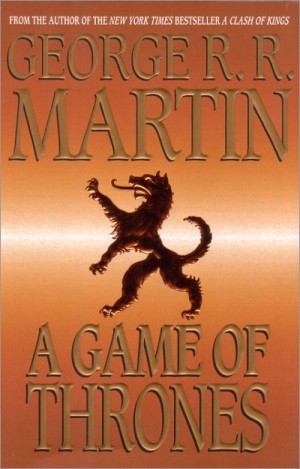 Adbgde information about the seller and his items
offlineAsk a question

"Game of Thrones" - a novel in the genre of epic fantasy of the American writer George RR Martin, the first book of the cult saga A Song of Ice and Fire. The first publication of "Game of Thrones" was held in August 1996. The novel is set in a fictional medieval world, where summer and winter lasts much longer than the earth; new winter is approaching, and in the meantime noble houses unleash a struggle for the throne of the Seven Kingdoms.
"Game of Thrones" is a harsh land of eternal cold and happy land of perpetual summer. This legend of the Lords and heroes, warriors and mages, warlocks and murderers, which brought together pursuant to an ancient prophecy. This is the story of the mysterious warrior who fight with swords of unknown metal, and the tribe of strange creatures that plunged our enemies into a frenzy. It is a tale of ill-Prince dragons, ready for anything in order to regain the throne, and the child that wanders through the twilight world mezhzhiznyu and death. This tragedy and betrayal, battles and intrigues, defeats and victories. This is a game in which the rate is high &

The book in the format fb2, txt, epub.

Related to item "George Martin Game of Thrones Book I":