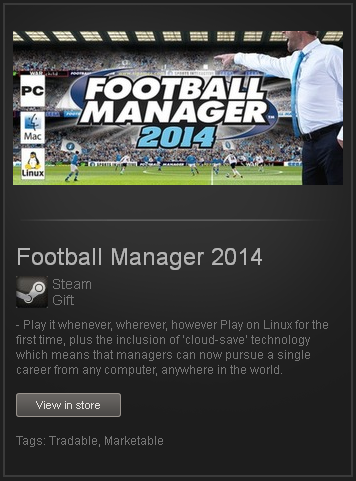 About the game: The studio Sports Interactive and SEGA are the company Football Manager 2014 - the most functional and technologically advanced to date edition of the famous series of football-economic simulations. You will be more than 1,000 improvements and additions compared with the previous season! Improvements touched not only the gameplay, but also the technical component. The first Football Manager supports the platform Linux. Also, the game introduced support for "cloud computing" - now managers can pursue a career on any computer anywhere in the world. Significantly expand the opportunities for setting up the game. Integration tools Steam Workshop allows each user to create their own. materials for Football Manager - photos and logos kinds of competitions and even a unique test. Football Manager 2014 is created on the new engine, 3D Match Engine. The game has improved artificial intelligence, lighting, animation athletes became more natural behavior of players in different situations on the field. In addition, the game has become faster and the picture quality is improved. Full processing undergone design principles, selection and implementation of tactics, resulting in more distinct become like a common strategy team and the role of each player in a given position on the field. In Football Manager 2014 update of the module was subjected to transfer. From now competing teams and their managers are more realistic transfer. In addition, the game added a lot of options for transfers, existing in reality, such as the ability to return the player at the time of the club, from which it was purchased, or to offer for the money interests of the players and the players of the club. Even more believable began contract negotiations: now the manager and the club´s board may express their concept of the development team - both at the initial interview, and when discussing the renewal of the contract. In addition, managers were able to try to renegotiate the terms of the contract and the amount of the fee as a reward for loyalty, if you receive a job offer from another club. Improved interaction between players, managers, their rivals and the media. For example, coaches are now making proposals for reserve players junior teams based on their impressions of their game. Managers can ask for the key players to talk to his teammates out of luck, and the meetings at the end of the season will present their impressions about the performance of the club and will designate targets for the coming season.