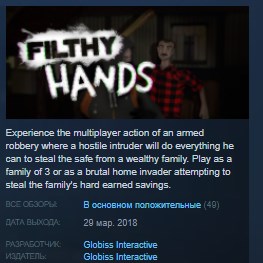 In a quiet suburb where nothing usually happens, the unexpected strikes: an armed robbery. Filthy Hands is a 2-4 person multiplayer game featuring two diverse maps wherein you either defend your house as a family of 3, or attack the house as a brutal robber.

Defend
Work together as a family of 3 to defend your valuable save, using different items ranging from a pan to firecrackers to give the robber the worst time of his life. Use teamwork to distribute tasks, such as hiding the safe and distracting the robber in order to save time before the police arrives.

Steal
Play as a one man team starring a robber who attempts to steal his biggest jackpot yet. Be sneaky or be courageous in order to steal the safe before the police arrives. Do you have what it takes to outsmart or eliminate an entire family who would do anything to defend their belongings?

Maps
Choose between two different maps for the ultimate robbery experience. Play in a quiet suburban house located in North America or sneak into the Austrian Alps for a more remote setting in an old fashioned mountain home.