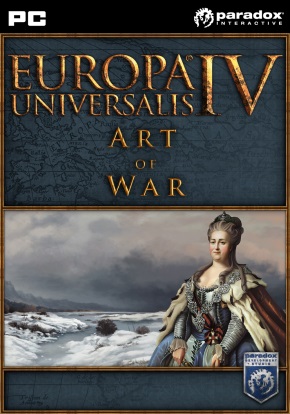 Uploaded: 24.01.2020
Content: Europa Universalis IV Art of War_59.txt 0,24 kB
Loyalty discount! If the total amount of your purchases from the seller GameCod more than:
If you want to know your discount rate, please provide your email:

Every second buyer (in random order) of all our products leave positive feedback - receive one of the more than 40 different games to Steam. What? This you will find out when you receive your gift in the mail.
It can be activated in the "Steam".

For a gift you must:
1) Buy our game
2) Leave a positive feedback with a comment "I want a gift," and specify it in your E-mail
3) Expect.

Gift Newsletter is done within 48 hours after writing a comment.
Attention!! Gambling Review - You warrant that you have read all the conditions for a gift, and if something is not clear - ask.

ATTENTION! The key can not be activated in Origin.

<Attention> ATTENTION! To activate complement your base game Europa Universalis IV </ attention> to be activated

The Art of War - addition to Europa Universalis 4 dedicated to the Thirty Years War and political instability between church and state. This extension improves the mechanics of gameplay that puts war in the forefront in your quest to dominate celebrate.

Superior sea battle and complete control over the army means that victory is entirely in your hands. Whether you choose to win alone or entrust the hope of the military forces of the Allies? Your decision will determine how long will last your empire.

Key games:
- Thirty Years´ War: a unique mechanic and events for the religious conflict that struck Europe.
- Napoleonic era: Fight for or against the revolution and create a completely new custom of the country on the map.
- The fighting on land and on the water: you can now leave the siege, assign goals to their allies. The entire fleet can now be upgraded in a single click, you can preserve the ships to save money on maintenance and fleet can automatically transport the army.
- Stamps. Combine their vassals in fortified communities (brand), thereby increasing the defenses. However, this approach reduced vassal payments.
- Improved Diplomacy. There was a possibility of selling the excess ships, battle with Casus Belli vassals, the ability to declare war in support of rebels in other countries. Also available the payment of reparations and waiver.
- Improved gameplay. Build army in 1 mouse click, refuse to support national provinces or groups of ideas, if any, is not useless.
- The new model of behavior of the rebels, the new system for the Cardinals of the Catholic states, the emergence of local autonomy at the provincial level, improved maps and game interface, dozens of small improvements.

<Delivery> This product is distributed through the digital distribution, represents the only pin and does not contain the packages and boxes. </ Delivery>

Do not miss hits, order from us))

Instructions on how to activate the key in Steam:

The easiest option just take friends license disk with the game or download any torrent tracker license an image, install the game with him, and when prompted enter the code purchased from us the key.

VNMANIE After activation serial key in steam, the key becomes invalid, ie re-use it is impossible.
Be sure to remember, and better write down all the details of your account! Without them you can not get access to the active games in the future.

Dear customers!
We will be very grateful to positive reviews!
Thank you very much, your GameCode.

All of our products on the page http://gamecod.plati.market