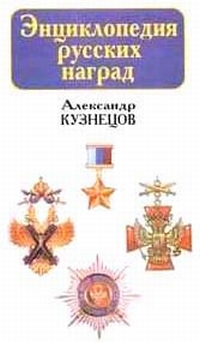 Nebula information about the seller and his items
offlineAsk a question

(Collegiate guide to the history of Russian-winning).
This encyclopedia of Russian nagradah.Nagrady Russian Empire.
Order of the Russian Empire.
Award medal of the Russian Empire.
Premium weapons.
Award marks the White Army.
Orders and medals of the Soviet Soyuza.Na background of already published books on the Russian awards presented to you encyclopedia - one of the most complete. The author not only tried as much as possible to tell you more about the history of Russian medals, crosses, medals and statute, but also about the people that have received this or that sign up to our differences dney.Sredi various kinds of awards for his service to the king and the fatherland was awarded weapon. Sword nobleman received the award in the saber, Dirk Marine officer in Russia were considered symbols of honor and dignity. You will learn about the history of Russian weapons and premium Russian weapons factories on Russian cold oruzhii.V book has a table of orders and award medals of tsarist Russia, award marks the White Army, orders and medals of the USSR. The application rules are wearing medals (1889), orders and medals of the USSR and the Russian Federation are given awards and church awards. Work is well illustrated, and is of interest not only for history teachers, but also for a wide range of readers