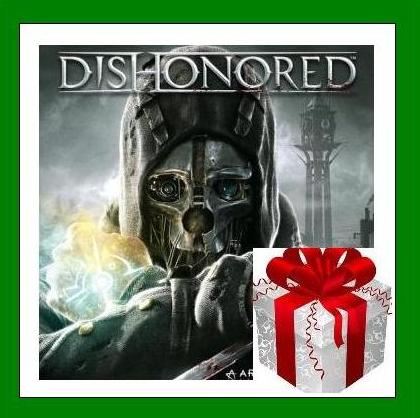 @MediaSoft information about the seller and his items
onlineAsk a question

After payment, you instantly receive a license key to activate the Dishonored game in the Steam.

The game has no territorial restrictions - REGION FREE and is suitable for activation in any country.

The game has no territorial restrictions.

Languages: English, German, Spanish, Italian, French. There is no Russian language in this version, be careful. Russifier is on the network.

Dishonored - this is a rich first-person shooter, in which you have to get used to the role of the killer, whose actions are driven by a thirst for revenge. A flexible battle system in Dishonored will allow you to combine your supernatural abilities, weapons and unusual devices in the way that you want to eliminate your goals. Pursue the enemies under the cover of darkness or expose the blade and fight the enemy face to face. The results of each mission depend on which path you choose.
Plot:
Location Dishonored - industrial city of Danwall, where the darkness of the shadows closely intertwined steam mechanisms and mysterious otherworldly forces. You were one of the best bodyguards of all the revered Empress. But when she was killed, you became the main suspect and turned in the eyes of the public into a dishonest killer who is known only by the mask that has become your calling card. And now, in this troubled time, when the city was struck by the outbreak of the plague, and a corrupt government armed with industrial technologies came to power, the dark forces offer you a gift that will make you more powerful than any person. But what price do I have to pay for this? The truth that lies behind your betrayal is as gloomy as the waters that wash this city. From now on, your life will never be the same.

If you have additional questions, contact the seller in the online chat or write to e-mail.