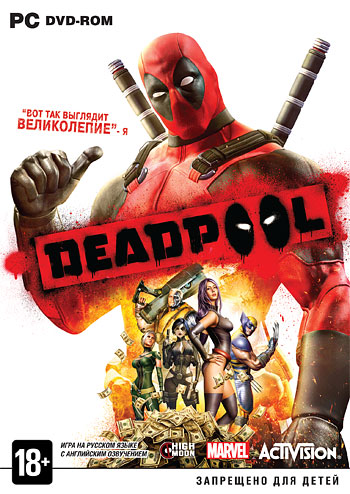 Boommedia information about the seller and his items
offlineAsk a question

ATTENTION PLEASE !!! You get the key from the licensed version of the game.
Only the CIS


This hero of the Marvel Universe is not like the other characters. It is generally no one else like! He hears voices, he said to the players, he loves Mexican food and groovy girls in bikinis. He is able to save the world like no other, turning it into a continuous occupation pathetic joke. Someone says he crazy, but his army of fans argues differently. He - Deadpool. He can be everything!


The first time in the history of Deadpool became the hero of action, and he really wants to outshine colleagues. Instead of harsh gotemskogo massacre in the style of the Dark Knight - katanas, hefty guns, explosives and bright, delivering brain acuity. Instead quarrelsome fury of Wolverine - mouthwatering terry Yumorok. Instead of dull assistants - invited guests of the popular comic book, selected on clothes ... or rather, in her absence. Deadpool knows that you do not have enough games superhero. And he delivers.


The game was released in Russian with the original English voiced.

By purchasing an electronic version of the game or supplements, you buy only the key. The game is downloaded and installed directly through Steam. To do this you must register an account on the system Steam.

To install the game you must:
1. Download, install and run Steam: http://steampowered.com/download/SteamInstall.msi
2.Zaregistrirovat account Steam.
3.Otkryt tab "My Games" from the top menu, at the bottom click "Activate via Steam ..."
4.Vas asked to enter the product code, enter the key purchased from us.