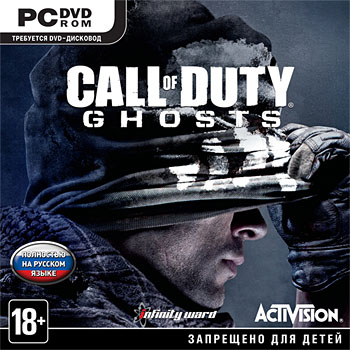 Boommedia information about the seller and his items
offlineAsk a question

ATTENTION !!! You get the key from the licensed version of the game, from the company´s new disc! Guaranteed purity key!
Warranty only for CIS countries!


The legendary series of first-person shooter, which has become one of the most popular game lines around the world, is ready to make a breakthrough to this perfection! The new game Call of Duty: Ghosts will offer you not fight for the sake of patriotism, liberty, or the triumph of democracy. You will be a fierce battle for survival.


Ten years after a global cataclysm former influence of one of the world´s leading powers dissipated like smoke. Destruction of the economy, the government can not protect the citizens and the military, desperately trying to keep under the control of the main regions of the country - this is a harsh reality that soldiers will face elite unit "Ghost." And once they are able to challenge the new global force, equipped with the latest technology and claims to world domination.


The game was released in full in Russian

By purchasing an electronic version of the game or add-ons, you buy only the key. The game is downloaded and installed directly via Steam. To do this you must register an account on the system Steam.

To install the game you need:

1. Download, install and run Steam: http://steampowered.com/download/SteamInstall.msi
2.Zaregistrirovat account Steam.
3.Otkryt tab "My Games" from the top menu, at the bottom click "Activate via Steam ..."
4.Vas be asked to enter a product key, enter the key purchased from us.

Write a review, the best evaluation of our work!