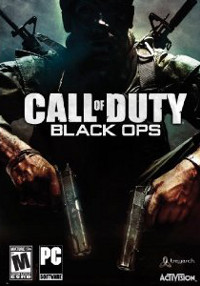 GamingMode information about the seller and his items
offlineAsk a question

The seventh part of the Call of Duty. Each game in the series contributed to the development of the genre of shooters, and the Black Ops was no exception. Players will enjoy a dynamic single-player campaign that tells about the events of the Cold War, as well as a variety of multiplayer modes, both classic and new.

Features:
Hot Spots. Events Call of Duty: Black Ops will take players during the Cold War. As part of an elite unit of soldiers will be involved in armed conflicts around the world, particularly in Cuba and Vietnam.
An impressive arsenal. Soldiers of the special unit will have access to the latest prototype weapon at the time, such as ballistic knives, fireworks cartridges for the shotgun or crossbow with explosive ordnance.
The real war. Interactive environments, thrilling story, spectacular special effects and a great director work makes Call of Duty: Black Ops one of the most realistic and exciting game about the war.
Fighting and winning. In the Black Ops are presented as classic multiplayer mode, including "Capture the Flag", "Bomb" and "Team Deathmatch" and a number of new, including "games with stakes."

Installation Instructions:
Download and install Steam (if not already installed);
Register your account on Steam or enter into an already existing one;
Go to the "My Games" and select "Activate via Steam ...", read and agree to the Steam Subscriber Agreement and enter the key immediately after the payment received;
After activation of the game will appear in the list of games and you can download it from Steam. The installation process (download) takes about 10-60 minutes (depending on your internet channel).

To activate the program you need an Internet connection and an account on Steam.
The keys are not activated outside the CIS.