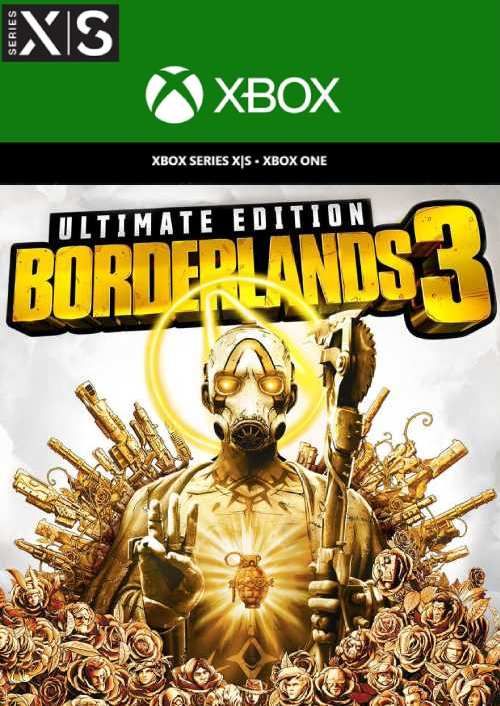 Uploaded: 30.10.2022
Content: text 29 symbols
Loyalty discount! If the total amount of your purchases from the seller NeMeNi more than:
If you want to know your discount rate, please provide your email:

After payment you will receive a key BORDERLANDS 3: ULTIMATE EDITION

Platforms - XBOX ONE and XBOX SERIES X | S
- A VPN with ARGENTINA connection is required to activate the key 🌏
- After activating the game WITHOUT REGIONAL RESTRICTIONS
- Games are forever associated with your Microsoft account
- You will be able to download games in any region and at any time, with all available languages

Borderlands 3 Ultimate Edition is the most complete edition, including the base game, all six expansion packs, and all bonus cosmetic items! Play as one of four Vault Hunters - the most reckless treasure hunters, each with unique skills, abilities and modifications. Acting alone or with friends, you will have to fight furious opponents, rake up more trophies and save your home from the ruthless psychopaths who lead the most dangerous sect in the galaxy.

ROOF ADVENTURE
You must prevent the Calypso twins from uniting the bandit clans and crushing the galaxy under you. Only you, the reckless seeker of the Vault, are able to fill up these reptiles.

YOUR HERO, YOUR STYLE
Reincarnate as one of four new Vault Seekers, each with unique abilities, a wide variety of skills and countless modifications. The Vault Seekers are a formidable force individually, but together they are simply unstoppable.
• Mose in the role of the ARROWER: during the fight, Mose can add firepower to himself by digitizing his exosuit - the Iron Bear.
• Amara in the role of SIREN: A strong and confident fighter, Amara´s Siren has the ability to release ghostly fists that crush her enemies.
• Z4KP in the role of HUNTER: Z4KP lives for the sake of hunting - like his loyal pets, unquestioningly carrying out any command of the owner. And do you know who they prefer to hunt? On pathetic nonentities like local bandits.
• Zane as AGENT: A specialist in unusual combat gadgets, Zane is incredibly good at getting into the battlefield, provoking confusion - and stepping aside as if he had nothing to do with it.

KILL AND COLLECT
At your service are a basillions of various guns and gadgets, and each skirmish promises a new mountain of loot. Cannons with autonomous bullet shields? In stock. Rifles capable of generating fire-breathing volcanoes? By itself. A weapon that grows legs and chases enemies while spewing curses? We also have this.

CONQUER THE FRONT
Visit worlds outside of Pandora, each with its own unique landscapes and unique enemies. Harsh deserts, ruined cities, deadly swamps - and more await you!

JOINT PLAY WITH ALL CONVENIENCES
You can at any time unite in a team over the network or sit together at the same screen, and neither the level of the character, nor the degree of passing the game is important. You will deal with enemies all together, but you will reap the fruits of victory - each separately. No one will be left without loot!