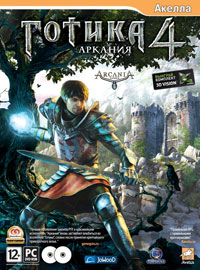 Uploaded: 09.07.2014
Content: text 83 symbols
Loyalty discount! If the total amount of your purchases from the seller Nickcd more than:
If you want to know your discount rate, please provide your email:

Instant delivery! Activation Key Code for the game Gothic 4: Arcania is displayed in the browser immediately after ordering!

The war enveloped the southern islands of the bloody mist, at last, has reached the island Feshir, which until recently was dominated by calm and idyllic. The protagonist of the game "Gothic 4: Arkania" returns to his village and finds her plundered and ruined. Those who attacked her, went to sea in their boats under sail with the emblem of an eagle.

Our hero, obsessed with vengeance, goes to the next adventure full of dangers, but soon realizes that the thugs attack on defenseless peaceful village was not just somebody's momentary whim. For all the world events, as it turns out, it is the invisible evil force, and our hero will soon meet with the mighty unknown enemy. But he opposes it not alone - his fate is inextricably linked to the mysterious beautiful stranger, as well as a powerful artifact from the long-forgotten past. The game "Gothic 4: Arkania" comes in an exciting and beautiful world, which attracts players of its wonderful landscapes and unsolved mysteries. Zones with different climatic conditions, rich and diverse flora and fauna, dark dungeons, towns and ancient castles to the magnificent architecture - all this awaits new adventure seekers. Graphics in the game is amazing - day and night, overcast sky clouds, light and shadow, wind and rain will not leave anyone indifferent. Realistic sound effects and wonderful music tracks even deeper immerses players in a atmosphere of peace Arcania, a entangled plot, a lot of jobs and well-designed combat system will not allow them to be bored for many memorable hours spent playing. The southern islands are waiting for you!

Features Arcania: Gothic 4:
• Large living their lives the world, with the change of day and night, the changeable weather and diverse regions - the majestic cities, picturesque valleys, forests deaf and underground caves.
• Lots of game options: explore the world around us, join the different factions and perform myriad tasks, hunt for strange people from the local fauna, be engaged in alchemy and crafts, create your own things.
• Large selection of weapons (swords, axes, spears, bows, crossbows) and spells (throwing fireballs, control the weather, levitation, and more) - a skillful combination of techniques melee and magical combat success lies in the battles.
• Great graphics and sound, with his head into the game.
• User-friendly interface and easy control - even those who are not familiar with the previous games of the series, the world's "Arcania" will feel right at home

Obratine note:
• The key does not have regional restrictions Region Free and activated in any country.
• Target language: English

Activation key Arcania: Gothic 4:
1. You need to download and install Steam http://steampowered.com/download/SteamInstall.msi (if not already installed)
2. Register novvy Steam account or log into an existing.
3. Go to the "My Games", select "Activate via Steam ..." and enter the key received immediately after the payment.
4. After activating the game appear in the list of games and you can download it from steam.

Gift:
• Each buyer who leave positive feedback and a desire to write in the comment to get a gift, will receive steam key to one of a variety of games.
• Distribution of gifts made within 5-7 working days from the date of writing reviews.
• E. mail to a recall is not necessary to leave :)